One of my favorite photography personal projects this year was an agriculture photography project recording daily life at Old Settler’s Dairy near Denmark, Wisconsin.  The farm is run by David and Donald Schlies and the brothers were nice enough to allow me access to hang out and record their daily life.  I tried to get out to the farm as often as I could, but with other shoots on my schedule and just daily life, I was only able to visit them twice a month or so. Still, my time there was filled with unforgettable and beautiful images; with my ten year stint as a newspaper photographer in South Dakota, I’d shot plenty of agriculture stories, but I don’t think I saw the beauty that I currently do on the farm.

My interest in agriculture photography has grown after meeting my wife Judy twelve years ago and hearing her entertaining and heart-warming stories about growing up on a dairy farm.  Her family gatherings are often filled with reminiscences of farm life – from chasing wayward cows to delivering calves in less than ideas conditions.  Sadness and loss are also part of the farm story, whether it be the loss of a beloved pet to wild animals or the loss of a crop due to a drought.  This range of emotion creates a deep connection between farm families and their land and animals.  My goal was to try and record those moments with the Schlies family.

Growing up a city kid, I thought mowing the lawn and helping with the dinner dishes was hard work.  The Schlies kids put that theory to rest as I saw them get out of bed as the sun rose to put in a few hours of work before school.  After school included more farm work as well as homework.  Despite this, these kids impressed me with not only their strong work ethic, but the joy in which they carried out their day to day tasks.  Even the youngest Ryan had responsibilities to the farm, with the older twins, Jeffery and Jacob stepping in to help when the job became too big for an 8 year old.  Watching the boys bomb around on their 4 wheelers in between chores made me think there might be some perks to all that hard work.

The oldest of that next generation is Jeremy who is a senior at Denmark High School. You can tell he would love to spend the rest of his life working on the farm, but Jeremy is a smart young man and he is aware of the challenges of running a family farm like Old Settler’s Dairy; small family farms are disappearing at an alarming rate with the trend toward large, corporate farms.  Jeremy has mentioned a few back up plans that which involve staying in the ag world.  With his amazing work ethic,  he will succeed at wherever he does.

The first morning I spent at the farm, Jeremy mentioned to me that one of the cows would soon be giving birth. I hung out near her, where I learned and photographed some amazing things about birth.  The most descriptive  picture isn’t included in this blog because it’s a little too graphic, but so depicts farm life.

One of the other moments I will remember is watching eight year old Ryan feed calves one summer morning. Ryan wasn’t much bigger than the calves he was bottle feeding.  In the photo below, I love how Ryan is so focused on the job of bottle feeding one calf while the other curiously licks his arm.  I learned just how curious and affectionate cows can be; the photo of Jeremy washing one cow while the other gives him a loving nudge depicts this well. I also learned this first hand when I was laying along the side of a field of winter wheat trying to get some interesting details shots, and I heard what sounded like heavy breathing behind me.  I turned around and found myself looking up at the faces of my bovine investigators, who were checking out what this city kid was up to.

Another moment I will remember was watching Jeremy and Casey Tisler, a family friend that also works on the farm, cleaning up an old tractor.  I thought it made some interesting shots, but also found it odd as to just how much of a deep clean they were giving that tractor. I mentioned that to Jeremy’s dad David, who told me they were getting the tractor ready for Take You Tractor To School day the following morning.  David also told me it wasn’t just that tractor they were getting ready, but two more so both Jeremy and Casey could drive to school. Jeremy’s mom Julie who teaches in Denmark, also planned to get in on the action with the third tractor.  I knew that would make for some great photos so I made sure I got back out that next morning.  You can find a blog post I did on that at this link.

I had planned to just spend one planting season documenting life on this dairy farm, but after this experience I know I will want to return not only for the great photos, but also for the warmth and camaraderie the Schlies family showed me.  I’m grateful for their authenticity both in front of the lens and without it.

I’ll be looking for some other agriculture photography opportunities for the coming year so if anyone reading this blog has any ideas, please reach out. 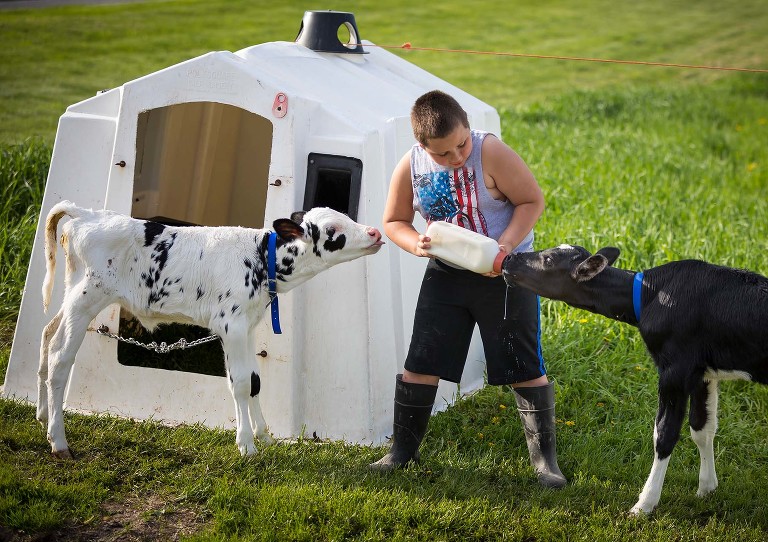 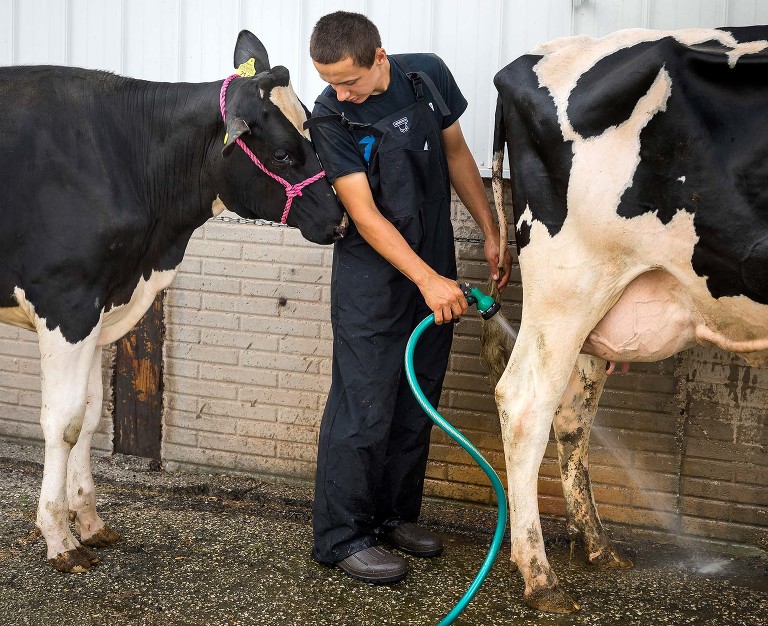 Jeremy Schlies gets a loving nudge from one of his cows as he washes another in preparation for the county fair. 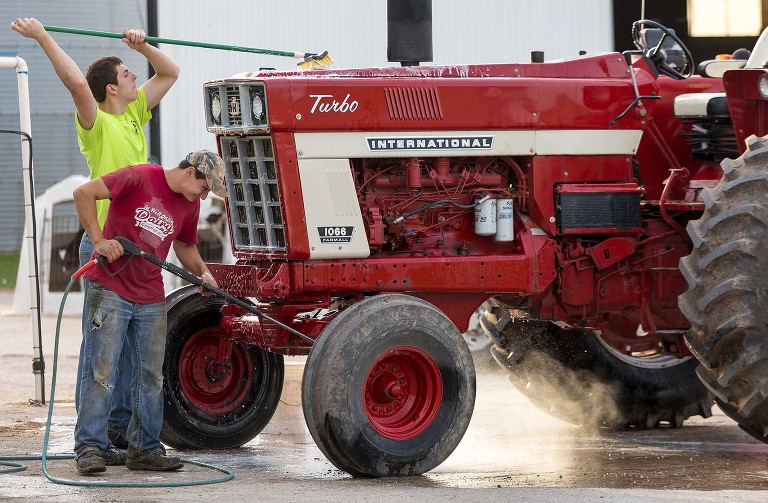 Casey Tisler and Jeremy Schlies do a deep clean of a tractor in preparation for Take Your Tractor To School Day at Denmark High School. 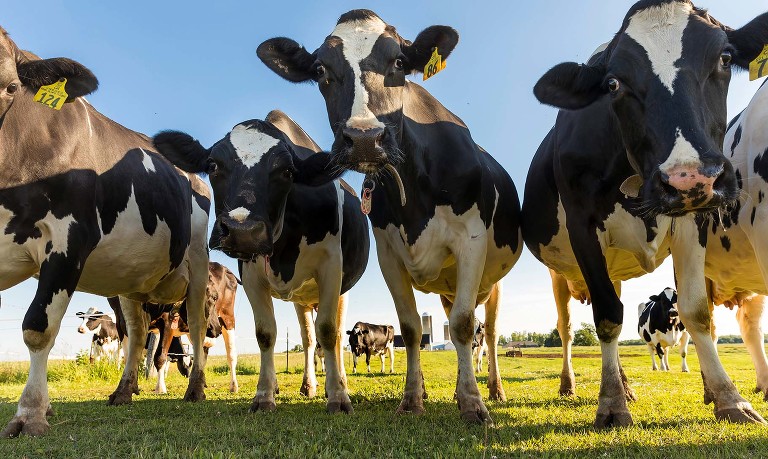 A group of curious cows check me out as I try and get some detail shots in a neighboring field. 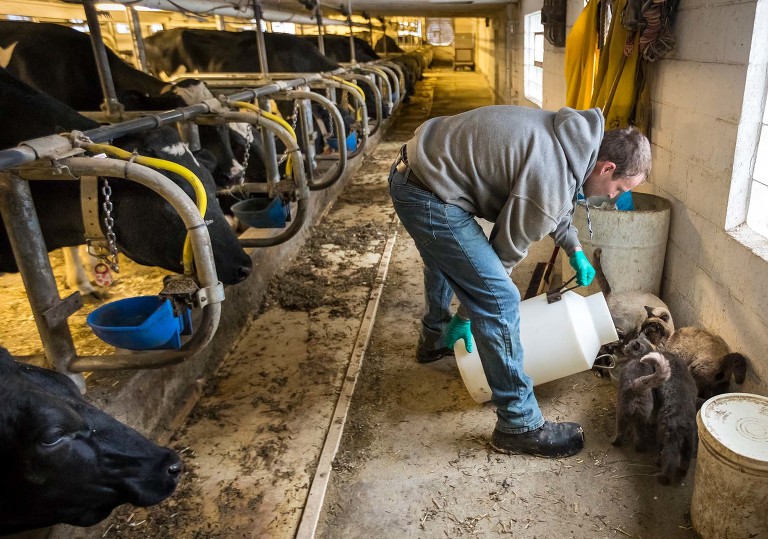 Tyler Selner fills a bowl with fresh milk for a group of barn cats after milking. 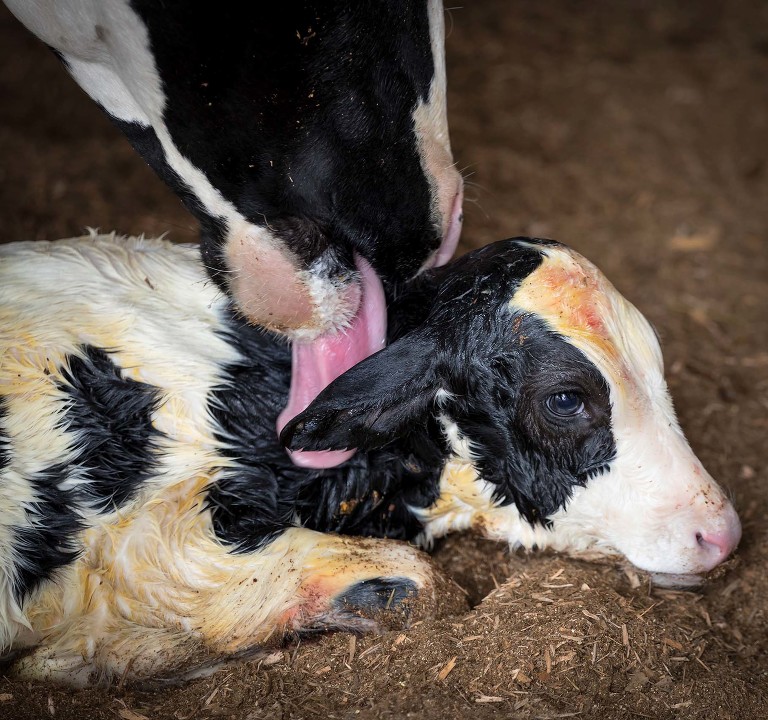 A cow licks her calf clean movements after giving birth. 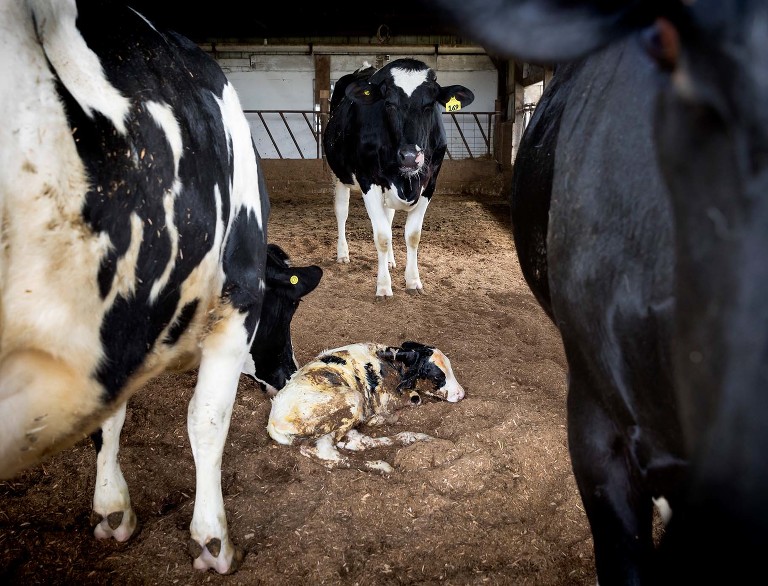 A group of expecting cows surround another as she nudges her new born calf to stand moments after giving birth. 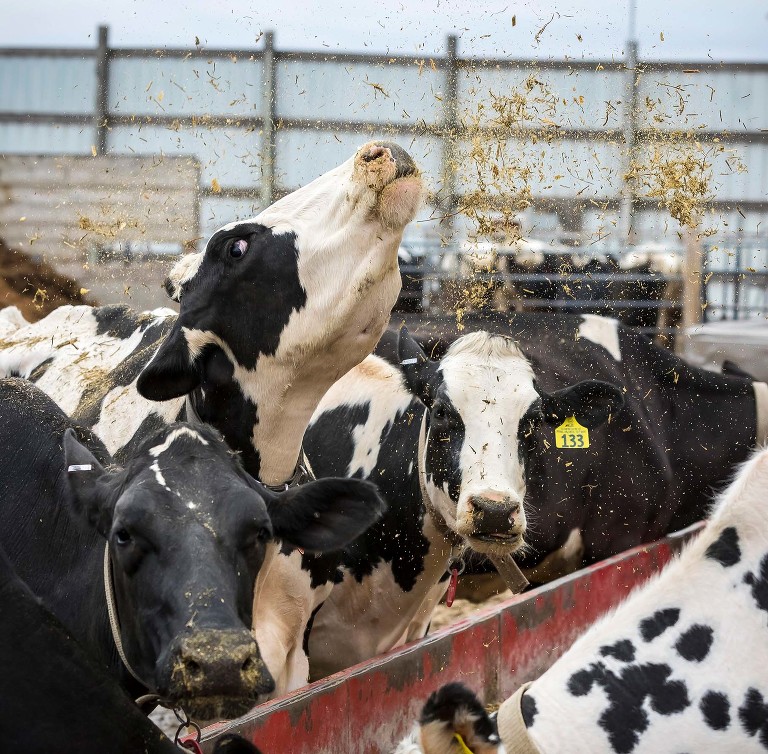 A happy cow tosses feed in the air. 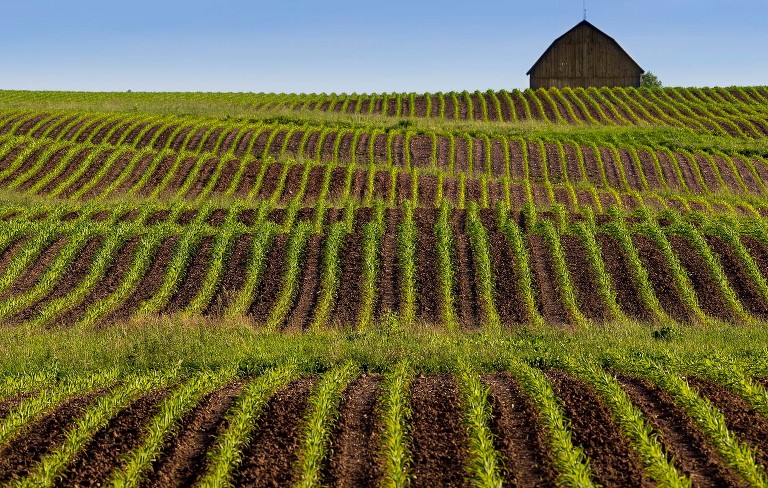 Rows of corn early in the growing season. 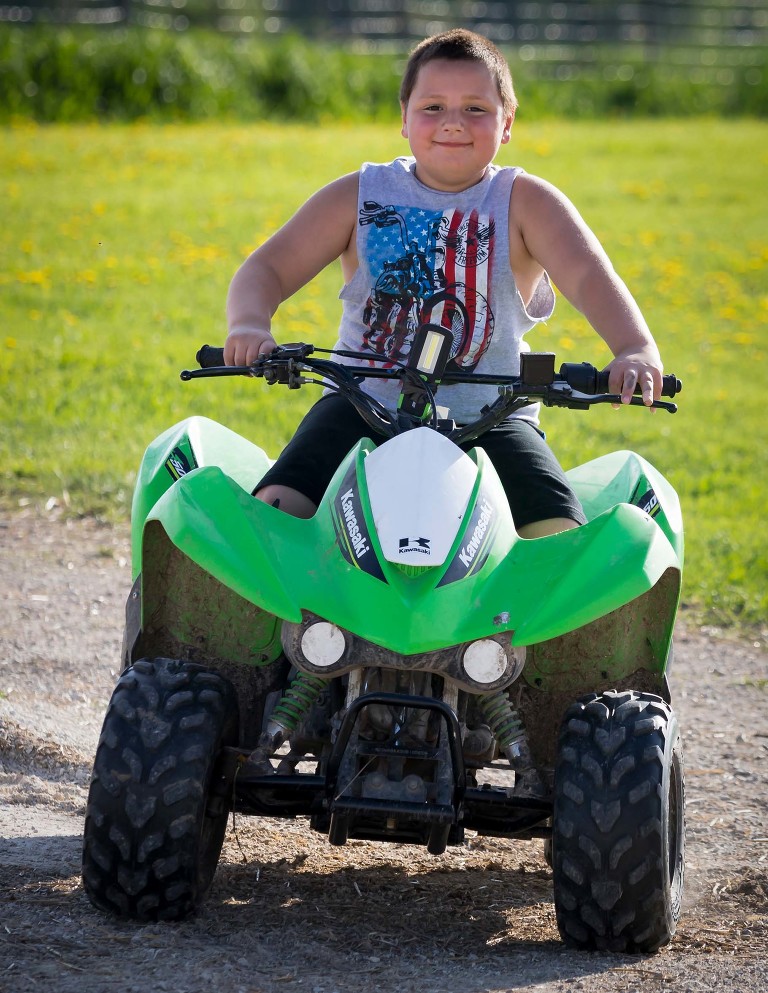 Ryan Schlies is all smiles as he cruises around the family farm on his four wheeler. 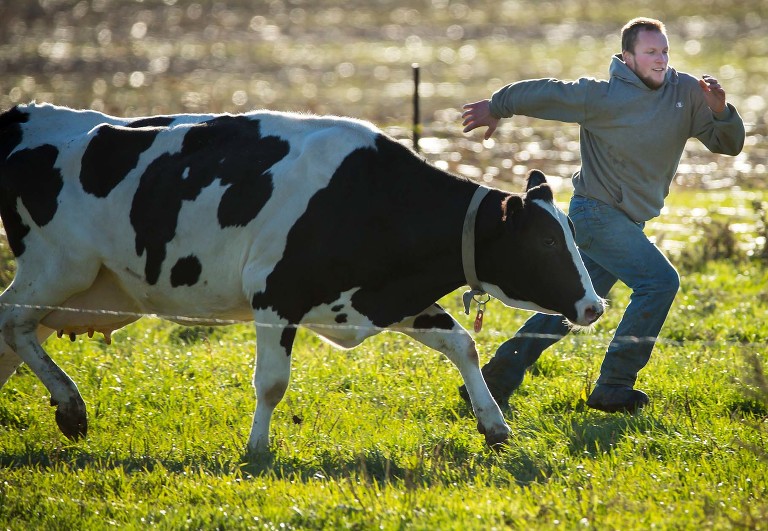 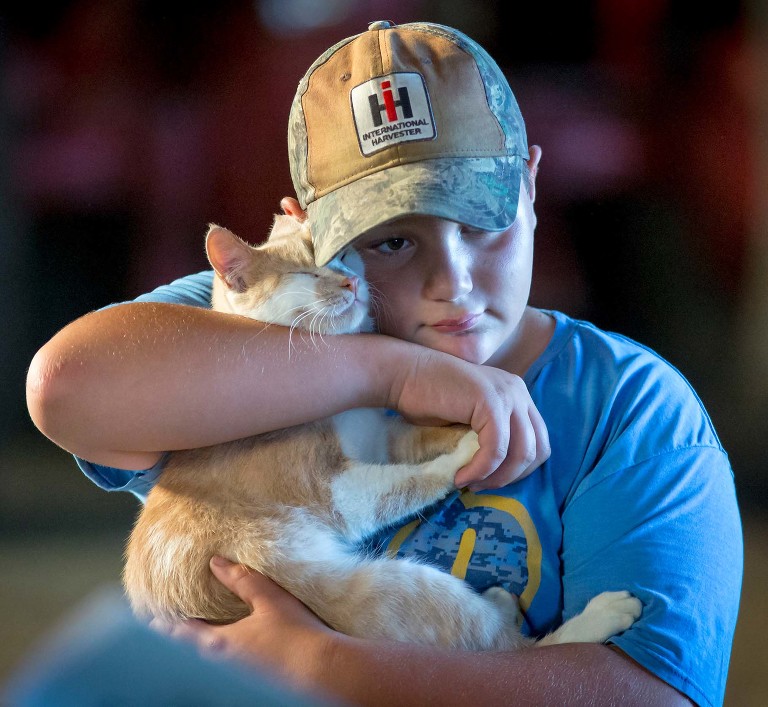 Jacob Schlies hugs one of the cats on the farm. 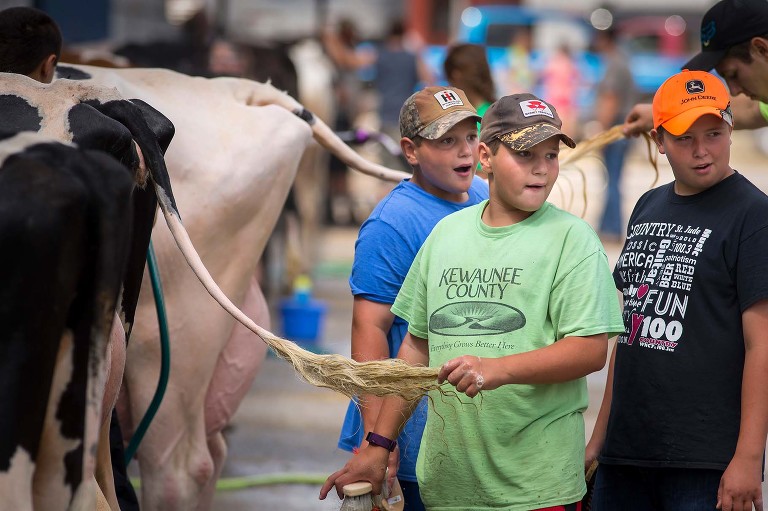 Jacob Schlies and his twin brother Jeffrey keep an eye on the arriving competition as they prepare a cow to be shown at the county fair. 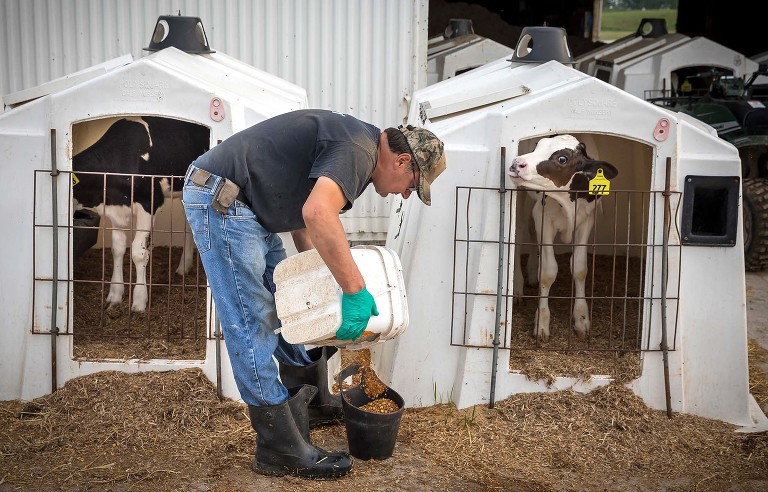 David Schlies has the attention of a curious calf as he works on morning feeding. 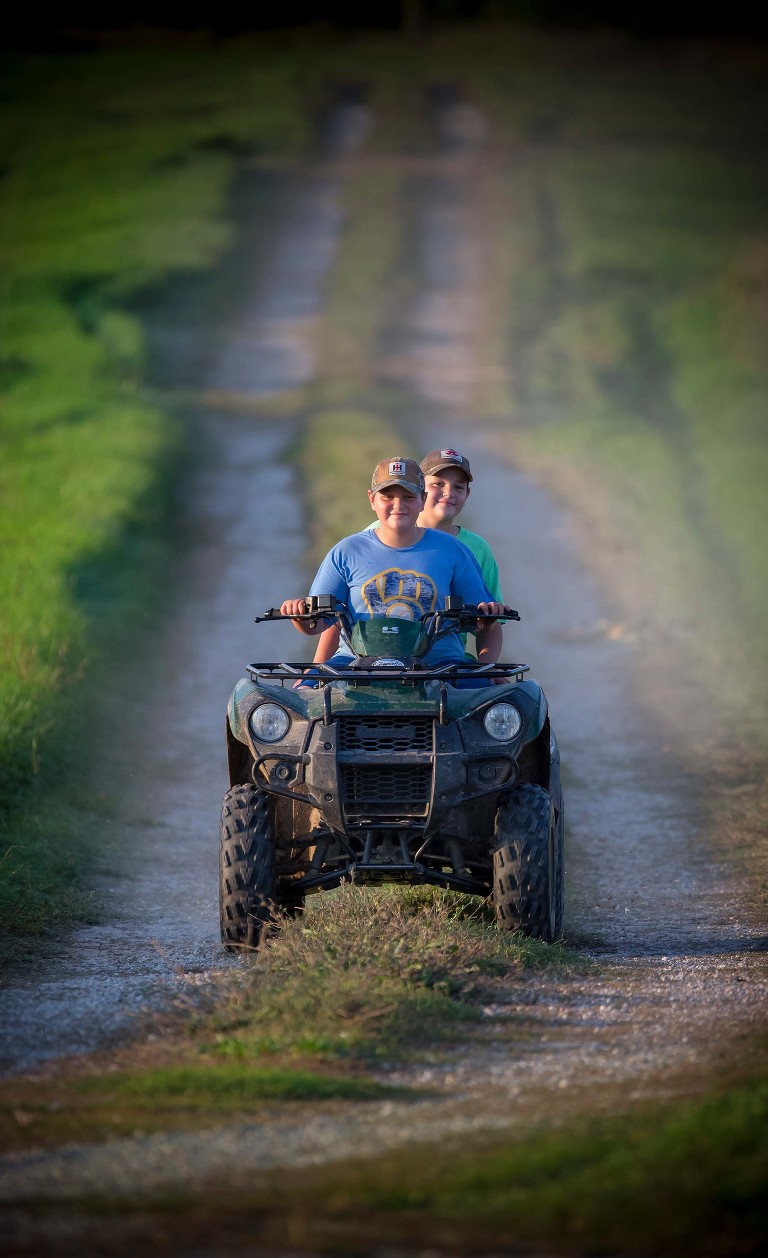 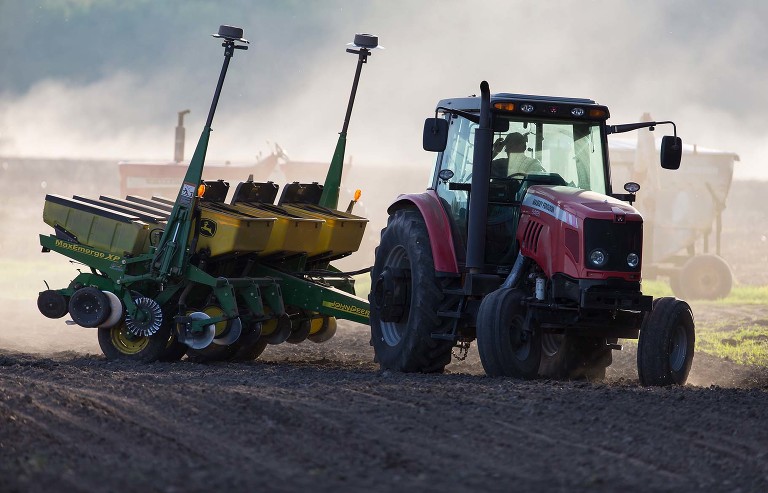 David Schlies adjusts his cap as he works on spring planting. 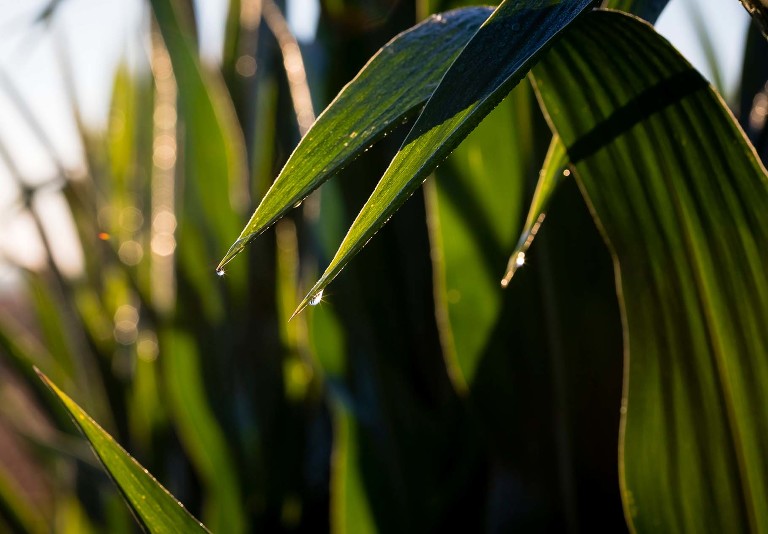 The sun glistens off dew in a field of corn. 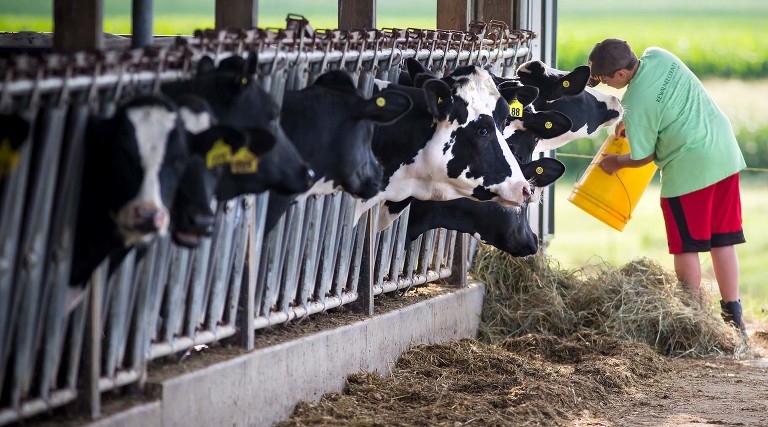 Jeffrey Schlies works on a feeding as part of his farm chores. 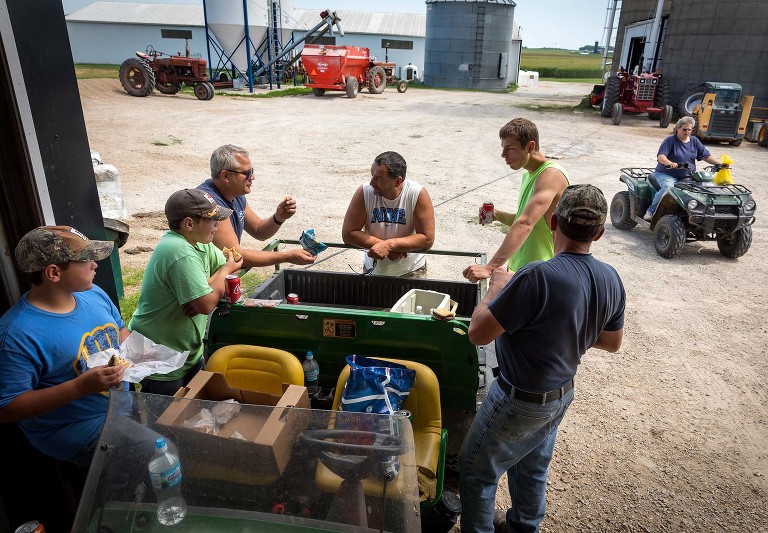 Julie Schlies arrives on a four wheeler with more food for the days crew during lunch. 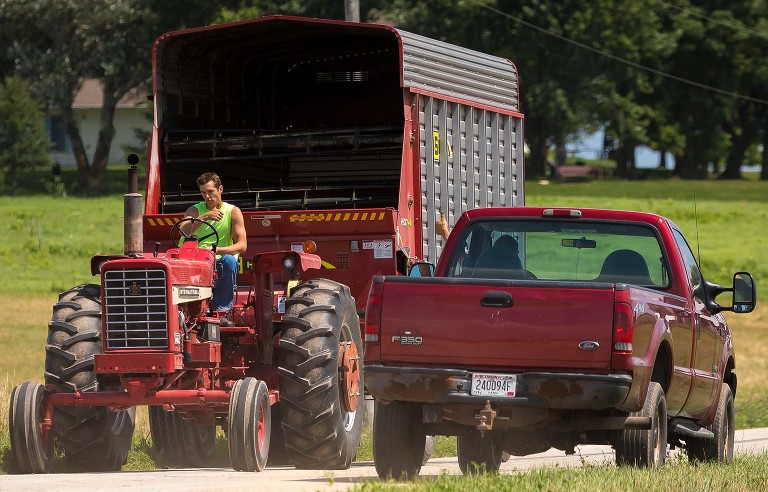 Casey Tisler and David Schlies exchange thumbs up as they pass during a harvest. 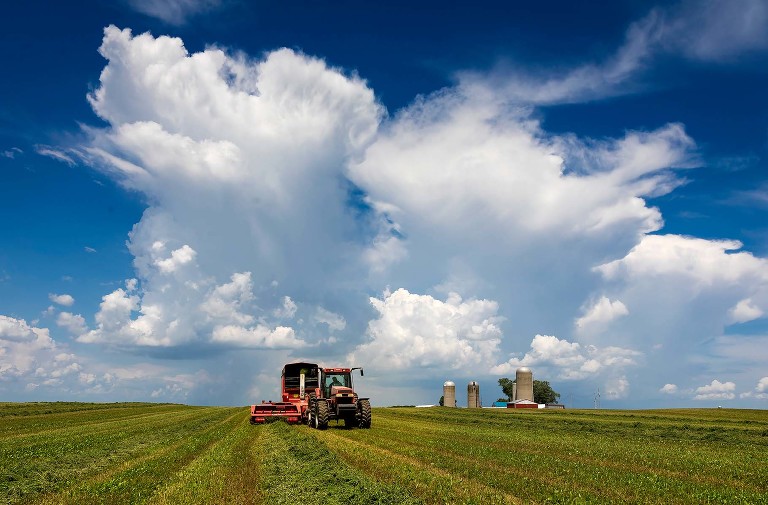 Amazing clouds as Julie Schlies harvests a field of oats. 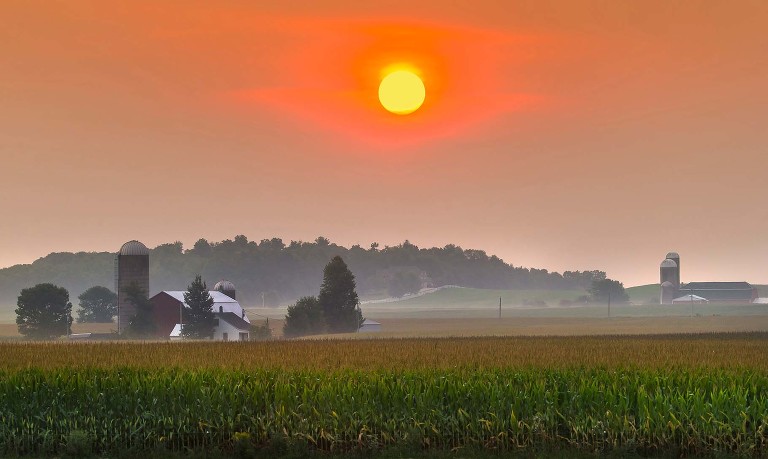 The sun rises over a field of corn. 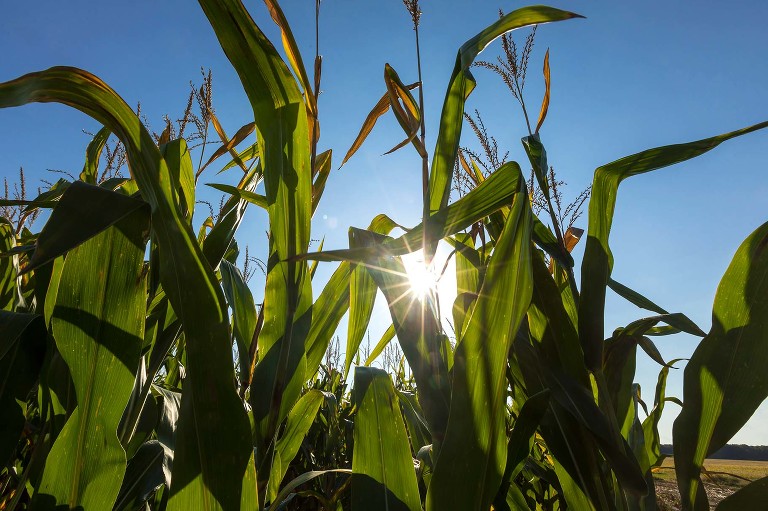 The sun pokes through a field of corn. 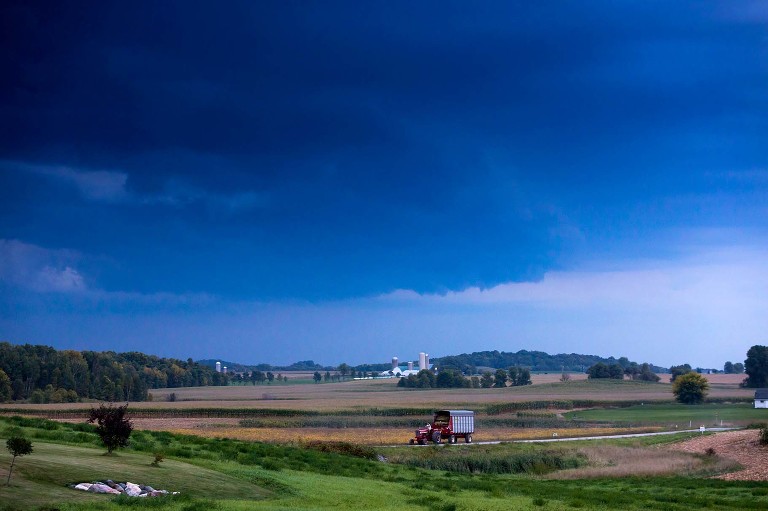 Donald Schlies heads back with a load of corn as he tries to get ahead of an incoming storm. 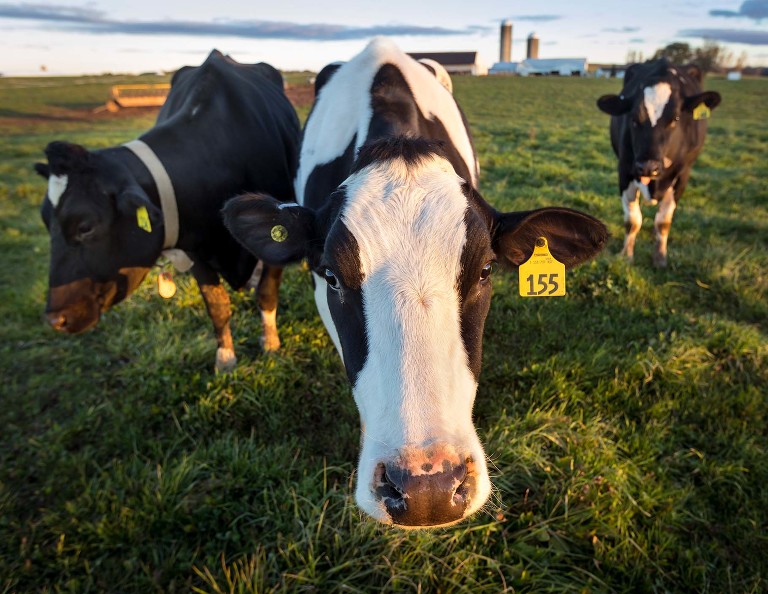 More curious cows checking me out. 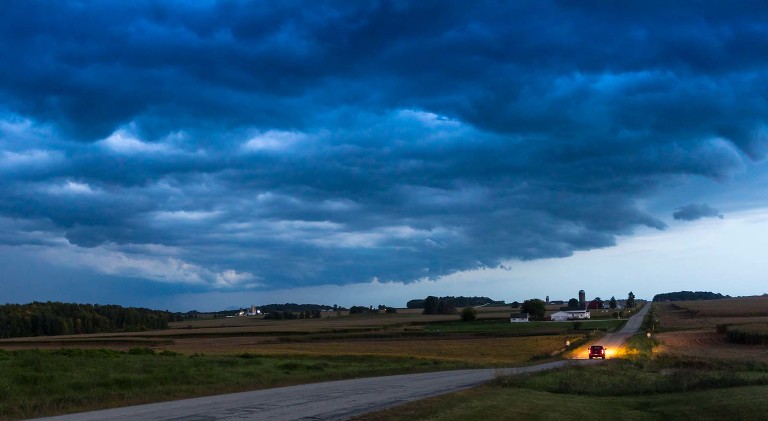 Clouds from a late day storm.

Dust kicked up by a combine in late day light as corn is harvested.