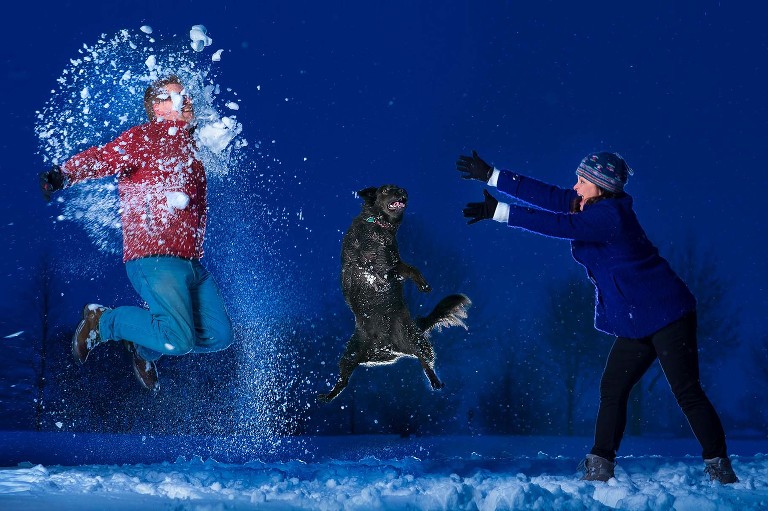 Hi, I had a number of people reach out to me asking how we shot the RoemerPhoto Christmas card this year after we posted it on several social media platforms over the holidays.  Well, the first thing I did was ask my main assistant, Matt Ludtke, to shoot the card again this year; he also shot last year’s card.  Calling Matt my main assistant is selling him short.  Matt is an excellent photographer who has taken on a bigger roll than just assisting me.  This past year, we started shooting more video interviews and b-roll for various clients and Matt has taken the lead on that.  Matt also steps in as a second shooter on bigger projects and handles things as the primary shooter if one of my clients who Matt has worked with needs something shot when I’m booked.  Matt also shoots Packers football for the Associated Press, so if I’m in the north end zone look for Matt in the south.  We also share one of my college athletics accounts.  He is more than just a guy who works with me; he has his own clients and works with other companies on bigger video productions.  And he’s a good friend.

Okay, on to the technical stuff on how we shot the photo.  The two aspects people wondered about is how we froze the flying objects like me, Chica and the snow.  With normal strobes and normal camera settings for strobes, we probably would have had some motion blur and ghosting of the objects.  We used Elinchrom Quadra HS flash heads and a Canon 1Dx camera body that allowed us to use the high speed flash sync capabilities of Hyper Sync with the Elinchrom heads.  Hyper Sync allows you to use a faster shutter speed with strobes or flash than the camera is rated for.  The Canon 1Dx normally can only sync with strobes if you’re shooting at 250th of a second or slower.  With the combination we set up, you can get into the 2000th of a second range.

Matt set up one of our strobes on a hill behind the subjects so that it was out of view; this got us that great backlighting.  There was another strobe to camera left to light the subjects.  Matt also put a color conversion gel on the strobes so that the light temperature of those lights was warm like tungsten light, which would make the sky even bluer than normal at dusk.

We tried a number of shots timing all three of us perfectly – but with my middle-aged man leaping skills and Chica not following photo direction all that well – we ended up shooting the three of us separately and then combining all the elements in Photoshop.  I know you’re asking “did you need a trampoline to get that high off the ground?”  With a running start and the adrenaline rush of getting the holiday shoot done, I was able to get that entire 24 inches of vertical on my own.

So that’s the back story on how we got this shot – not all that incredibly complex and nor different from what we do day in and day out on our normal shoots.

Thanks again, Matt, for shooting the photo.