I've lived the photography business since childhood, first tagging along during my father's long newspaper photography career before ever carrying my own camera gear. My interest grew as I watched the fascinating process of my dad making black and white images appear while shaking trays of chemicals under the red lights of a developing room.

My professional career started with a ten-year stint as a newspaper photographer meeting tight deadlines, adapting to curve balls and making the famous and not-so-famous comfortable in front of my lens.

I returned to Green Bay in the mid-1990s to start my own business, and now regularly travel around the U.S. and internationally for my clients. I enjoy the creative challenge of combining unusual angles, lighting and lens options to produce the perfect commercial image.

I've won first place awards in Pictures of the Year International, National Press Photographers Best of Photojournalism and National Headliners, along with being a three-time winner in the Pro Football Hall of Fame photo contest.

I love the variety of projects I get to work on, from healthcare organization and foundation annual reports, high-energy casino and gaming shoots, industrial projects at locations as diverse as cheese manufacturers and steel plants, to corporate culture assignments and documenting the Green Bay Packers. 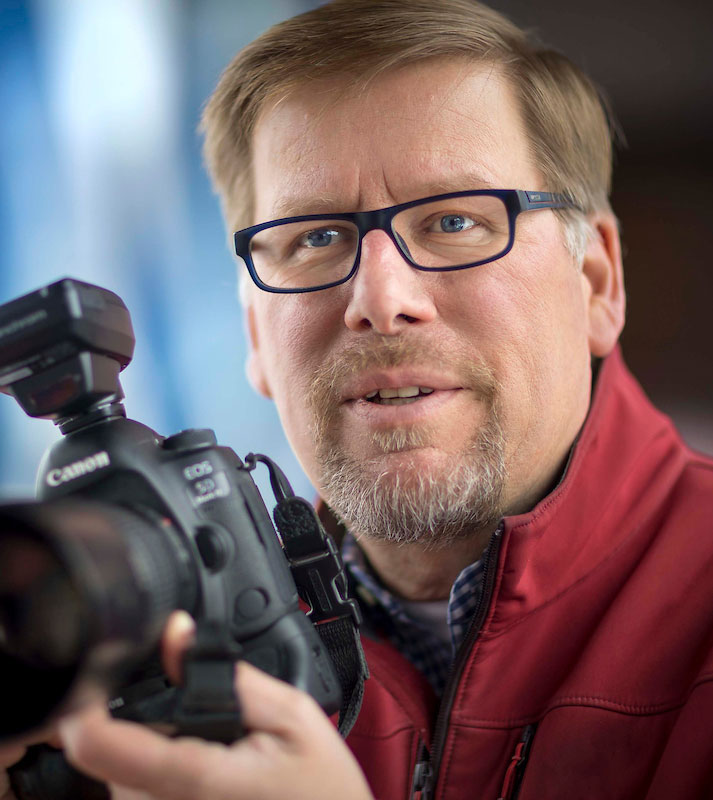 I was recently contacted by Marc Brummel of Brummel Architectural Group in De Pere, Wisconsin to shoot some architectural photos of one of his recent residential designs.  I’ve done architecture photography of some of Marc’s projects before and he does some very cool work.  This shoot had a bit of a challenge, as the house sat on a rock ledge. To get the type of shots Marc wanted, I would need to fly my drone within inches off the top of some trees.  He wanted the shots at dusk, so I’d need to try and keep the drone steady for a slightly longer exposure for that time of day.

I scouted the project during daylight hours and shot various photos so I could key in with Marc on the exact shots he wanted. I wanted to be as efficient as possible with those last few minutes of dusk, when the sky has that deep blue hue, the lights within the house start giving their nice warm glow and you still have enough ambient light to give detail to the exterior.

On the day of the final shoot, we had some great weather except for higher winds than I had wanted.  I hoped they would die down as night fall set in, but if anything, they picked up.  I still flew the mission, kept things safe and was impressed with how well my DJI Mavic 2 Pro held steady in the wind.  My shutter speed for the main shots was 1/13th of a second; I’ve shot slower than that with the drone, but always in calm winds.  I shot plenty of frames to make sure I had something that would work.  I had a few frames with some camera shake, but more than enough to make my client happy.

So, here are a few of my favorite shots from the shoot!

I recently had a magazine shoot in a remote area near Munising, Michigan to shoot a portrait for a story on a couple from New York that had moved to a cabin in the woods for a year. The client had examples of the type of shot they wanted, showing the subject in a relaxed pose, and addressing the camera with the cabin behind them. I got plenty of those shots, but I had a little bit of the subjects’ time left and they were more than willing to let me try one more shot. For this shot, I used my drone so I could get about 30 feet in the air and look down on them standing on the front porch with the cabin and its environment around them. During the time of day we shot, the front porch and the camera side of the cabin were in shadow rimmed by the late morning light from the east, which made the background bright and contrasty. Not exactly the most friendly of exposures, but with the dynamic range of the sensor in the DJI Mavic 2 Pro and just the right amount of toning in Adobe Camera Raw, I was able to get a shot I really liked.

I’m finding more and more uses for the drone and I’m starting to feel that I always need to pack it as necessary gear for just about any shoot.

I love it when everything comes together just right with a little added extra surprise to make a shot even better.  Last week I did a late day drone shoot for Boston based Stoss Landscape Urbanism of the downtown Green Bay, Wisconsin CityDeck.  I had shot this project when it was original built through the three yearly phases of construction and how the Green Bay community used the river front project.  Earlier this summer Stoss reached out to me, after seeing some of my other drone photography, to see if I could get some updated shots of the deck with my drone.  The ¼ mile long, 2.5 acre linear park runs along the edge of the Fox River and connects a regional network of bike and pedestrian trails with downtown Green Bay. It was important to get shots showing how the project interacted with it’s environment.  I was real happy with how this shot was coming together and even more happy when I saw this pleasure craft approaching and knew the bridges would be opening for it.  I shot this photo at just shy of the FAA ceiling for flying a drone of 400 feet above ground level and within the half hour after sunset that a FAA licensed part 107 pilot can fly with the proper lighting on their drone.  I was happy with the way all the elements came together and how I got my client the type of shots they where looking for.

In the last few months as the Covid-19 pandemic swept across the globe, it affected all of our lives in many ways.  As a photographer, it affected my business a great deal.  All of my sports photography work vanished overnight and it has yet to come back; corporate photography jobs got cancelled or pushed back as companies pivoted to employees working from home. And my event photography took a massive hit just as anything that required people to gather got cancelled.  As a creative, I still needed to find an outlet beyond being creative in smoking BBQ.  One area that I was still able to do some work in was my stock agriculture photography.  Luckily, I’ve made some contacts in the area that are nice enough to let me hang out – from a proper social distance – and shoot some photos.

So here are some of my favorite agriculture photos from the past few months.

As I’ve said here before, I’m always up for a creative challenge and taking on unique projects.  I was recently asked by the Howard-Sumamico School District to shoot, in both stills and video, a tribute to the 2020 graduates of Bay Port High School in Howard, Wisconsin.  The tribute was 2020 spelled out in the parking lot of the Green Bay Area school with school buses supplied by Lamers Bus Lines.  Having a drone was great way to be creative with this project.  Below is my favorite video clip and a couple of the still shots.