In the 25 years since I entered the world of editorial photography, I’ve probably covered the President dozen of times.  Back in my days as a staff photographer for a daily newspaper, I was usually in with the local pool that accompanies the President on his visit.  But during my time as a freelancer, most news agencies have  a photographer permanently assigned to travel with the President, so my responsibilities have generally been to capture the arrival and departure of Air Force One.

It’s always exciting to see Air Force One burst out of the clouds and see the choreography of a Presidential motorcade, but the photos usually are nothing more than the President waving from the steps.  We are usually kept a few hundred feet away, shooting from a media platform and we usually get blocked by White House or Secret Service staff as the President shakes hands with the local greeting party.

When the President arrived on Wednesday at Austin Straubel Airport, I could see Green Bay Mayor Jim Schmitt and Wisconsin Governor Scott Walker both heading his way with Green Bay Packers jerseys as gifts.  I either had my view blocked or the trio faced away from me as the President accepted his gifts, but as they broke apart Mayor Schmitt and President Obama shook hands and enjoyed a little laugh.  I knew I had one of my favorite photos of a Presidential visit when they both flashed those big smiles. 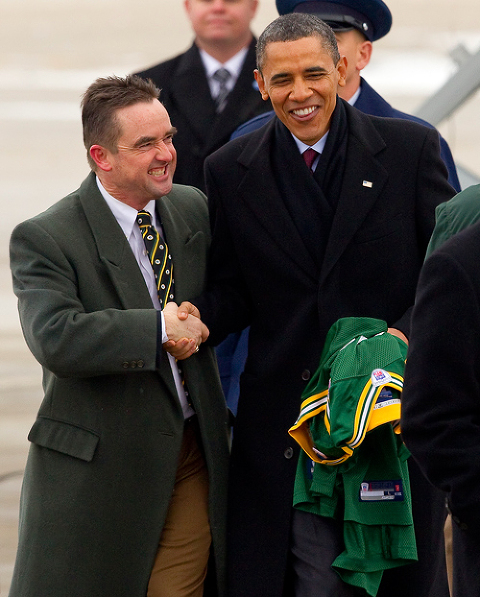 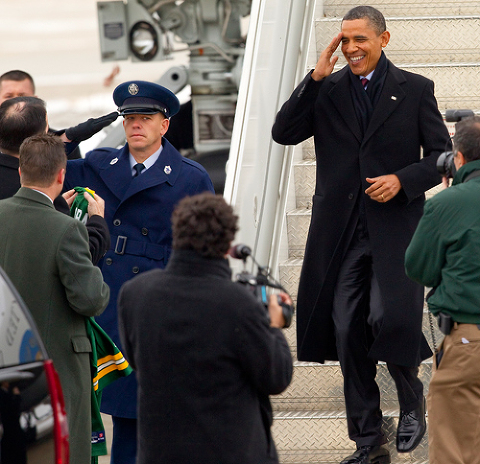 President Barack Obama salutes as he steps off Air Force One. The President was greeted by Green Bay Mayor Jim Schmitt and Wisconsin Governor Scott Walker. The President received a gift of Green Bay Packers jerseys 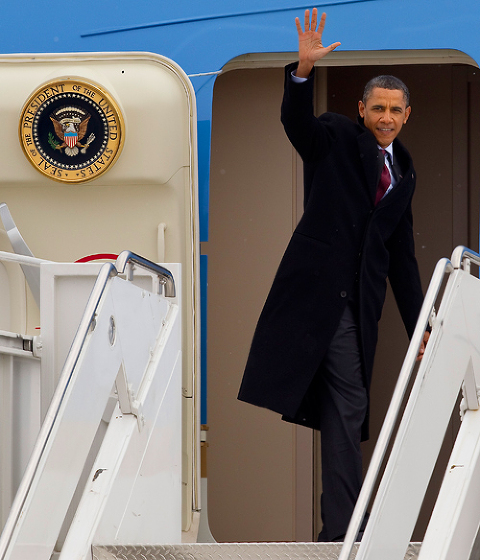 President Barack Obama waves from the door of Air Force One at Austin Straubel Airport in Ashwaubenon, Wis. Wednesday, Jan. 26. 2011 before departing.